Do you know what Speed Optimizer Pro is?

Speed Optimizer Pro is one of the many ambiguous applications out there. The dubious distribution and questionable results presented by Speed Optimizer Pro are the main reasons that our team of qualified malware experts categorized it as a potentially unwanted program. If you are not using Speed Optimizer Pro and it got onto your operating system by accident, our team recommends you to remove it as it holds no value and could act in ways that are hard to determine.

Speed Optimizer Pro auto starts with Windows and displays a window advising you to scan your system for various errors. After the analysis at our lab, we concluded that although the initial results presented are legitimate some of them are also questionable. The application can detect actual system errors, ActiveX and COM errors, various junk flies, etc. But the unusual feature of the scan results is that Speed Optimizer Pro picks up on various temporary files. In reality, the removal of these files and errors will not improve your system’s work all that much. 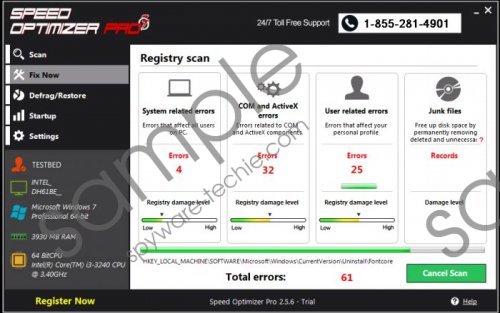 After the scan is complete, you are advised to optimize your system. But once you try to do that you are asked to pay a certain amount of money. The price is $39.99, and the payment can be made via PayPal or debit/credit card. There are a lot better options regarding applications that would optimize your system; thus, we do not recommend using Speed Optimizer Pro, in fact, our team advises to delete it as it is suspicious to say the least.

Distribution of Speed Optimizer Pro is questionable as in most cases it is distributed via bundled software. A lot of software that are spread in this manner is considered to be undesirable because it exploits the users’ common weakness – attention. Users do not tend to pay proper attention to the installation process; therefore, they end up with applications on their system that they do not want to have. There is no better advice than telling users that they must read everything with caution while installing any application onto their system.

How to remove Speed Optimizer Pro for your system

Remove from Windows 7 and Windows Vista