Do you know what FBI Moneypak is?

FBI Moneypak is a computer infection which gets in your computer’s system in the same way as other threats. The infection is created to trick computer users out of their money by presenting a pop-up message saying that you have to pay a ransom of 100 dollars. You cannot do anything on your computer, because everything is blocked. As the infection is a false notification, you should remove FBI Moneypak from the system as soon as you can.

FBI Moneypak does not define a real reason for disabling your computer, because if it was an actual FBI notification, you would exactly know what you have done wrong. The infection claims that the computer is disabled because you have violated copyright and Related Rights Law. According to the notification of the malware, you have probably used some software, video and music files illegally or distributed copyrighted content. Moreover, you are supposedly accused of “viewing or distributing prohibited Pornographic content.” Some malware is said to be present on your computer, as well. Ignore everything that FBI Moneypak tells you, and do not even consider paying the ransom. The creators of the infection demand that you use Moneypak to pay the fine.

Fine may only be paid within 72 hours after the infringement. As soon as 72 hours elapse, the possibility to pay the fine expires. 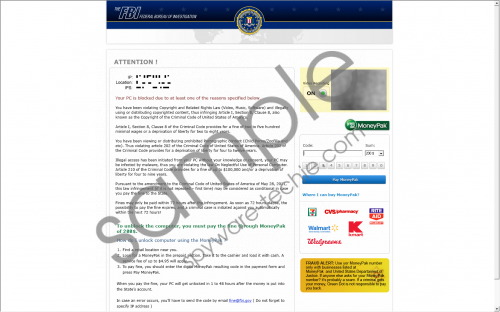 To unblock the computer, you must pay the fine through MoneyPak of 100$

Do you genuinely believe that FBI would attempt to charge you via the Internet and crash your system? Please, ignore this malware and do not believe that if you pay the ransom, your computer “will get unlocked in 1 to 48 hours after the money is put into the State’s account.”

The infection also claims that it is monitoring you at the computer. If you do not have a web cam attached to your computer, a small display shows smoke instead of the image. In any case, there is no evidence obtained that FBI Moneypak can capture pictures and send to remote servers.

FBI Moneypak is an infection that attempts to swindle you out of your money by claiming that you have breached copyright law and that you have to pay money if you want to restore your settings. Removal of the infection is a must, because as long as the malware is not removed you cannot use the computer properly.